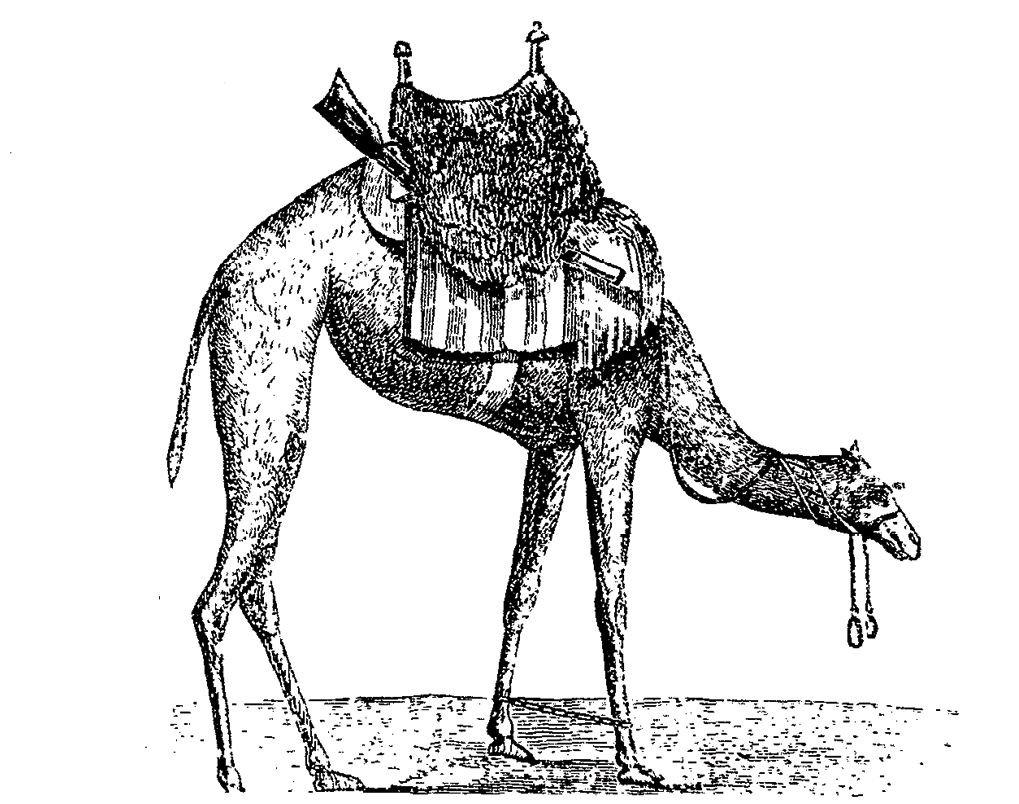 In 1848, the Treaty of Guadelupe-Hidalgo officially ended the U.S.-Mexican War, leaving America in possession of most of what we now consider to be the Southwestern United States: Arizona, New Mexico, Colorado, Utah, Nevada, and California. The US government was aware that much of its new territory was desert, and without a trans-continental railroad in place, a fast and effective means of crossing the desert was needed. In 1855, after years of campaigning, Secretary of War Jefferson Davis finally got permission to try out what seemed like the perfect solution to this problem: camels.

The first time Davis suggested that the US Army begin a campaign to import and breed camels for use in the West, the answer in Congress was unrestrained laughter. But as Americans back East slowly learned the realities of travel across the desert Southwest, people began to take Davis’s idea more seriously. Finally, in 1855, Davis received permission from the administration of President Franklin Pierce to found an official United States Army Camel Corps.

Problematically, there were very few camels in the United States, so Henry C. Wayne, a Brevet Major in the US Army, was chosen by Davis to buy the camels and transport them to the United States. Wayne was the son of diplomats and had spent his childhood around the Middle East and so, with a grant of $30,000, he departed across the Atlantic. With stops in Tunisia, Egypt, and Turkey, Wayne purchased 33 camels. Egypt proved a particularly hard market, as the British viceroy refused to allow any exportation of camels from the country. However, with a bit of bribery, Wayne was able to purchase 10—most from the viceroy himself. In various places around the Mediterranean, he also hired several Turkish and Arab “camel drivers,” though most of them actually had no training. To understand which camels were best for the special conditions of the US desert, Wayne made sure to buy both one-humped dromedary and two-humped Bactrian camels.

33 camels proved too few to really test out their potential in America, so Porter returned to the Middle East shortly after his first trip to acquire more. This time, he made sure to hire more experienced camel drivers. One of them was a Greek/Syrian named Hajji Ali. Ali’s parents were Christian, and he was baptized under the name Philip Tedro. After converting to Islam in his youth and making his pilgrimage to Mecca, he took the name Ali Al’Hajaya. Skilled with camels, Hajji Ali quickly became one of the best herdsmen in the United States. There were few Arabic speakers in the West, so Hajji Ali quickly became Hi Jolly to the frontiersmen and soldiers with whom he worked. He ultimately settled in California, married an American woman, and became something of a folk hero as well, inspiring songs, stories, and movies.

The actual training and testing of the camels was left to Lieutenant David Dixon Porter of Camp Verde, a fort in Southern Texas. Porter took his assignment seriously, and with 75 camels and a body of troops at his command, he had the resources he needed to work. In field trials the camels proved far superior to the mules the Army had been using. They had better endurance, required less food and water, and traveled faster due to their adaptations to desert life. Porter himself came to respect and even admire the camels, keeping an especially striking white female as a pet.

Unfortunately, the rest of the soldiers who worked with them didn’t agree, finding the camels bad-tempered, smelly, and difficult to work with. Prone to biting and spitting when angry, the camels were hated by the vast majority of soldiers in the Corps, who would beat and even kill them. And while they made very effective pack animals, stronger and more enduring than horses or mules, they were too ungainly for use in battle, despite their long military history in the Middle East.

The Camel Corps lasted just 11 years. While many in Congress had never taken the idea seriously, what conclusively ended the Corps was the very man who first thought of it. When the American Civil War broke out in 1861, Jefferson Davis was elected the first and only president of the rebel Confederate States of America. When the Confederacy was defeated in 1865, Davis became one of the most hated men in the newly reunited country and nobody wanted any association with him. Thus, in 1866 the one and only United States Army Camel Corps was officially disbanded.

While many of the camels were sold to private owners (Hi Jolly attempted and failed to start a camel ranch in his new home in California), some escaped and were seen for years in the desert. One, the so-called Red Ghost, was seen repeatedly, the corpse of an unknown man strapped to its back. The discomfort of the leather straps caused the camel to go into a rage and even kill a woman in 1883 before it was ultimately shot. While Western legend continued to claim that camels lived in the Southwest, the Red Ghost was the last one recorded.

Even in the history of the American Old West, a time and place full of strange events and people, the brief military experiment with camels stands out. While it had little effect on what followed, the sheer weirdness of it ensures its place in memory and legend.